Teens in Art@Work add murals and mosaics around The Avenue.

Pennsylvania Avenue between Jubilee Arts at 1947 and the Shake and Bake Family Fun Center at 1601 is a lot more vibrant, artistically speaking, thanks to the creative energy of about 80 teenagers whose summer job assignment was to paint murals and create mosaics in this part of West Baltimore. 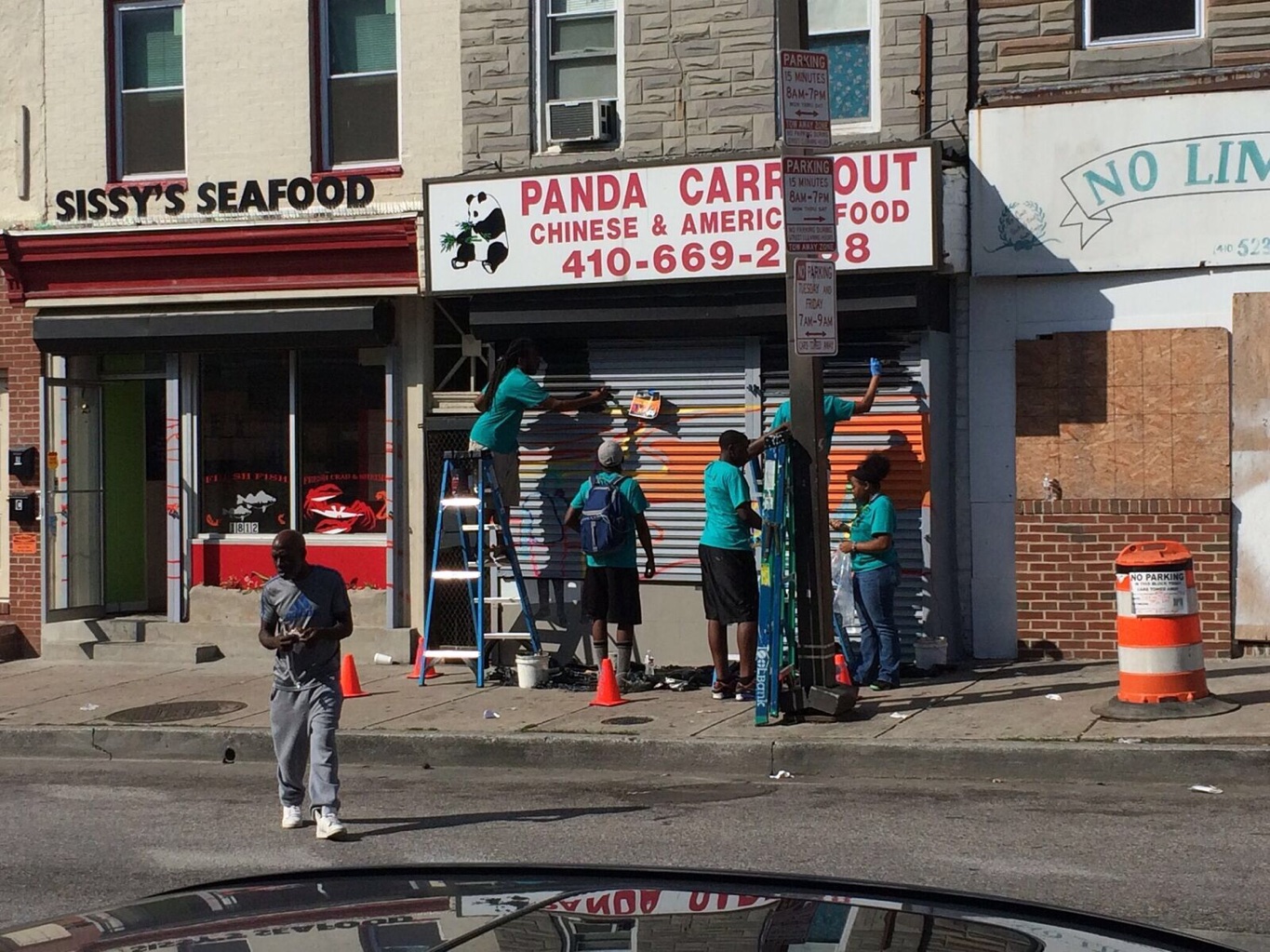 “Once again, we knocked it out the box,” said a proud Herb Massie. 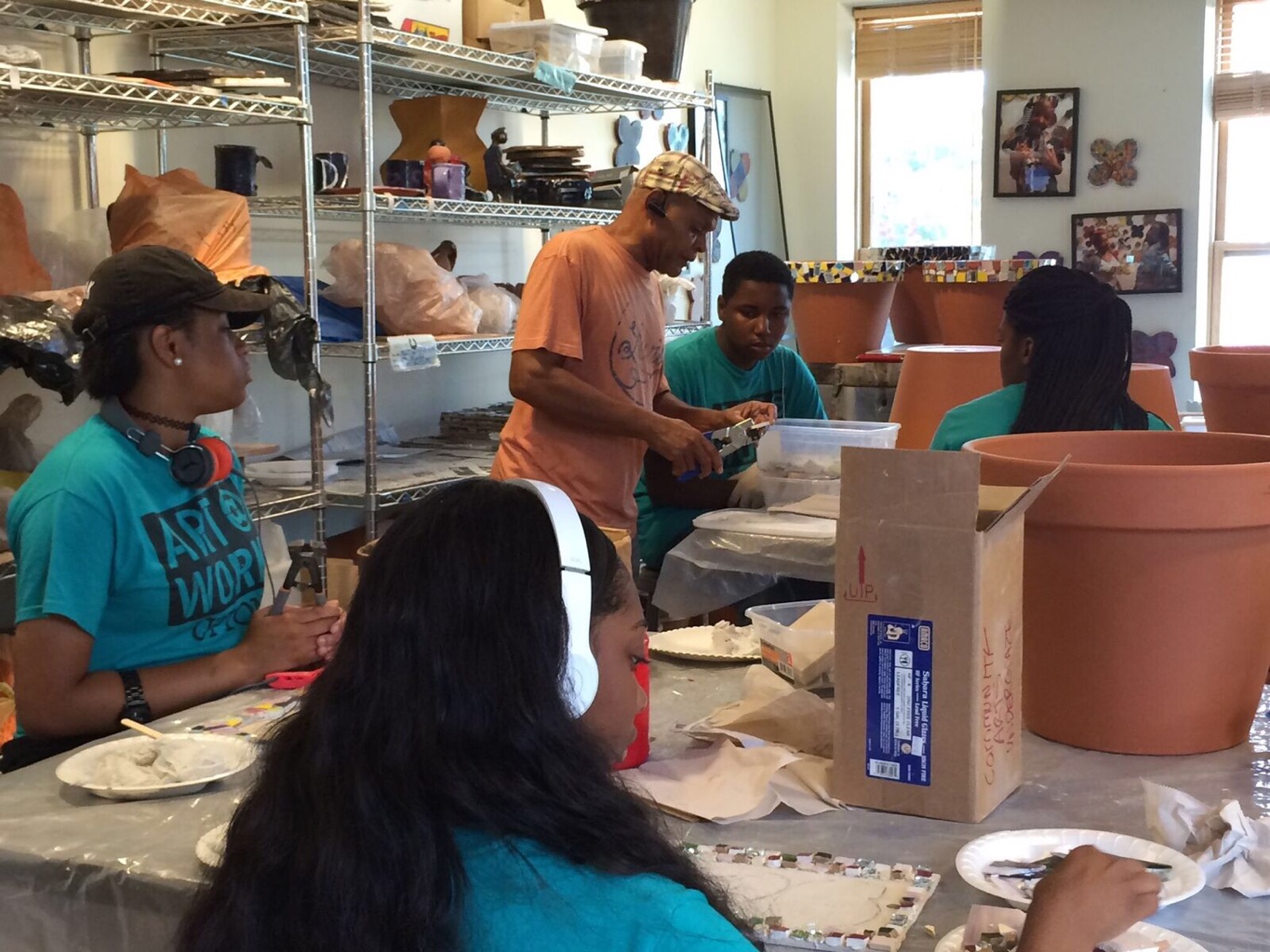 Massie is an artist whose team of teenagers created mosaic house address signs and flower pots to spruce up the 1900 block of Division Street, a block over from The Avenue, as the historic thoroughfare is called. Massie grew up on Division.

The five-week project, called Art @ Work: Upton, was a partnership between Jubilee Arts, a center for cultural activity since 2008, and the Baltimore Office of Promotion & the Arts. Last summer, Art @ Work created murals and mosaics a bit to the west in Sandtown-Winchester. In addition to Massie, the artists – a mix of veterans from last summer and newcomers – were Julie Horton, Ignacio Marino Larrique, Megan Lewis, Gary Mullen, Iandry Randriamandroso, Ernest Shaw and Michael Thomas. 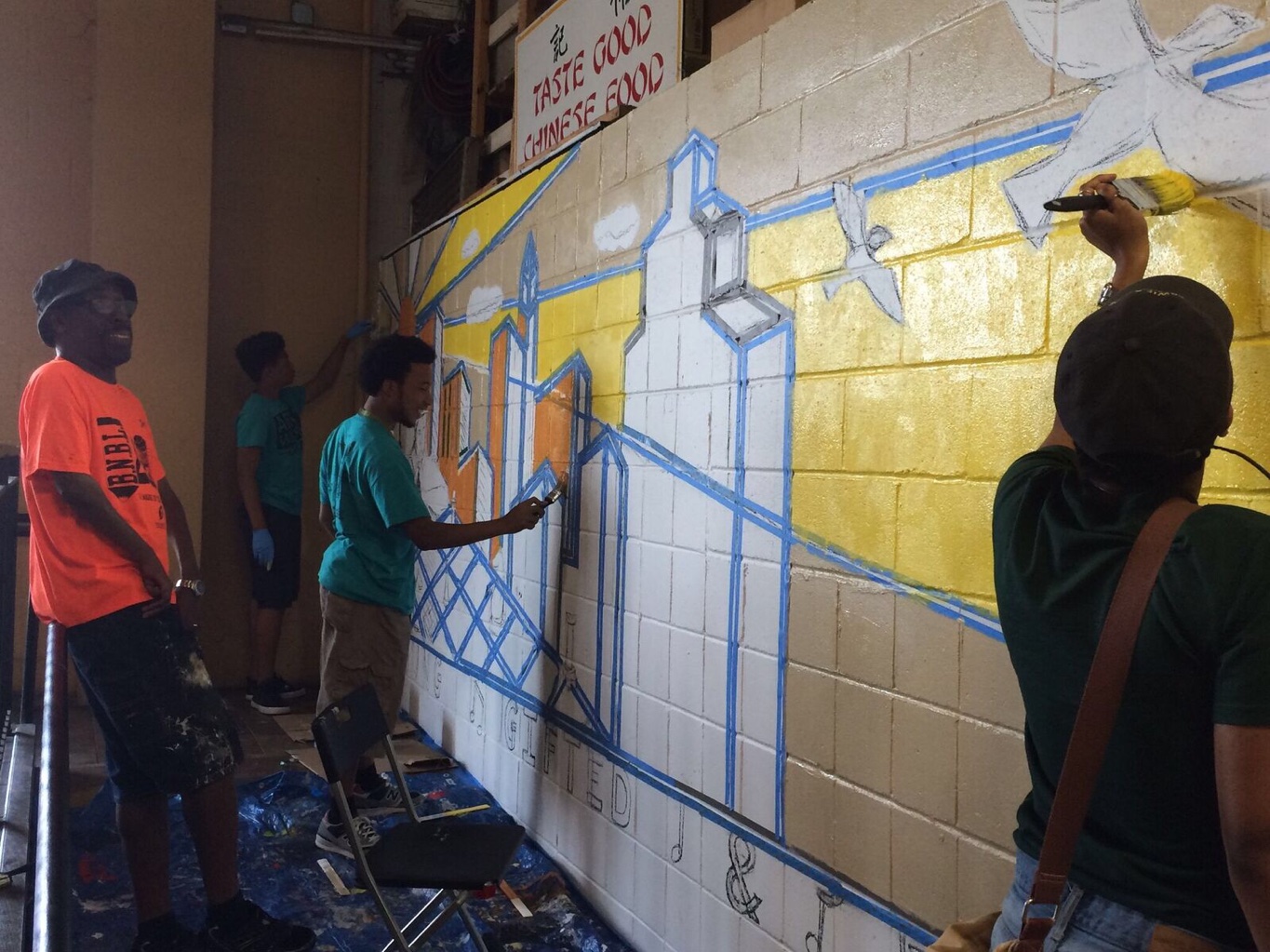 Some of the young artists had never drawn or wielded a paint brush until they came under the tutelage of Thomas and the others. “It’s just shapes, y’all. It’s not that hard,” he said during the first week, while instructing his group on drawing circles, squares, triangles, rectangles and ovals.

In their distinctive blue T-shirts, the teen workers were conspicuous as they gathered each morning at Jubilee Arts before heading to sites that ranged from the Avenue Market to Etting Park to the Eutaw Marshburn Elementary School. 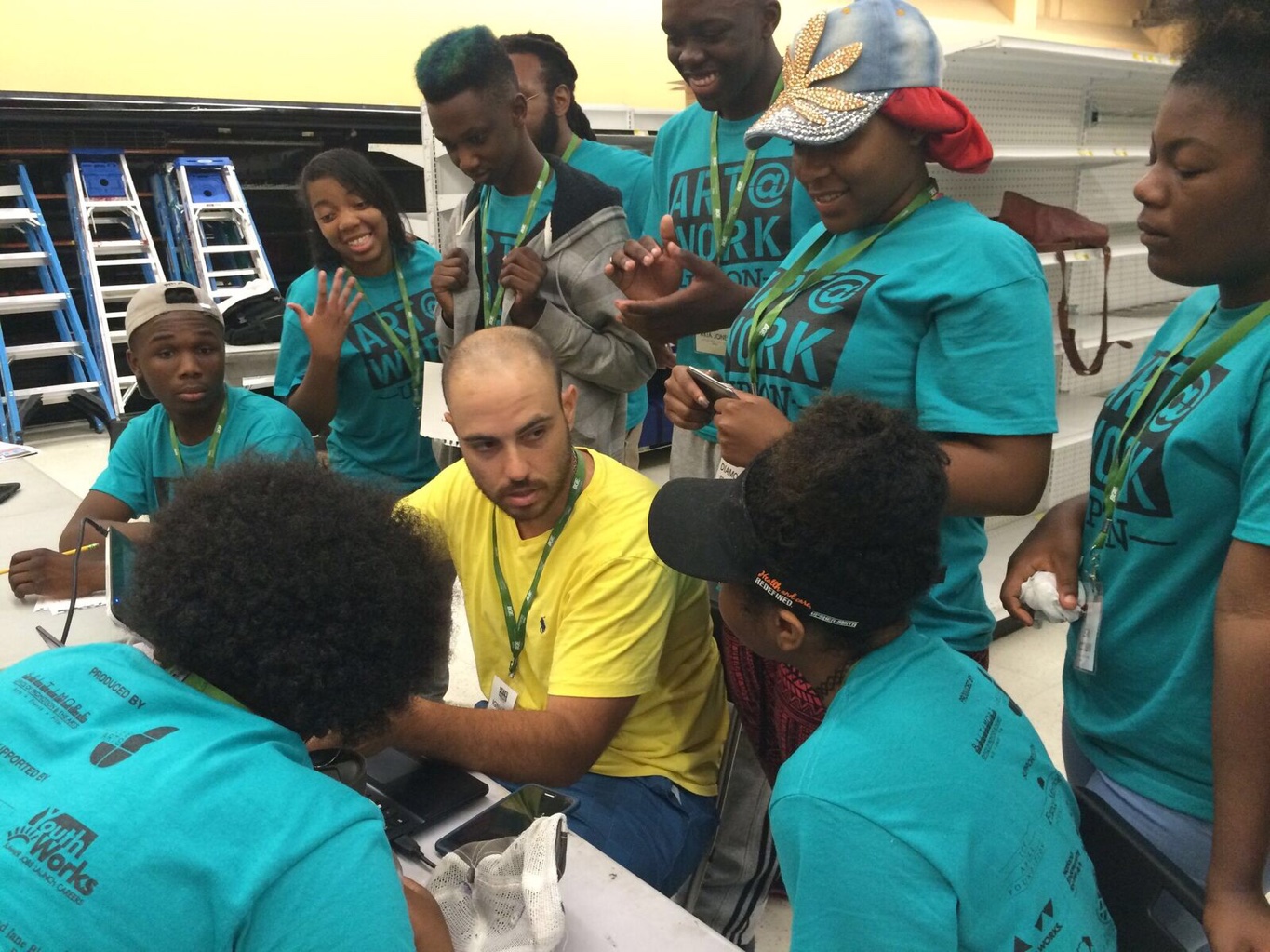 “It’s impacting Pennsylvania Avenue in a positive way,” said Diamondrae Richardson, “because a lot of people can see they still have people that are young that still do proactive things." She was on the team of Ignacio Marino Larrique, a native of Uruguay who now lives in Miami. They painted bright images on security gates on storefronts like Panda Carryout in the 1800 block. 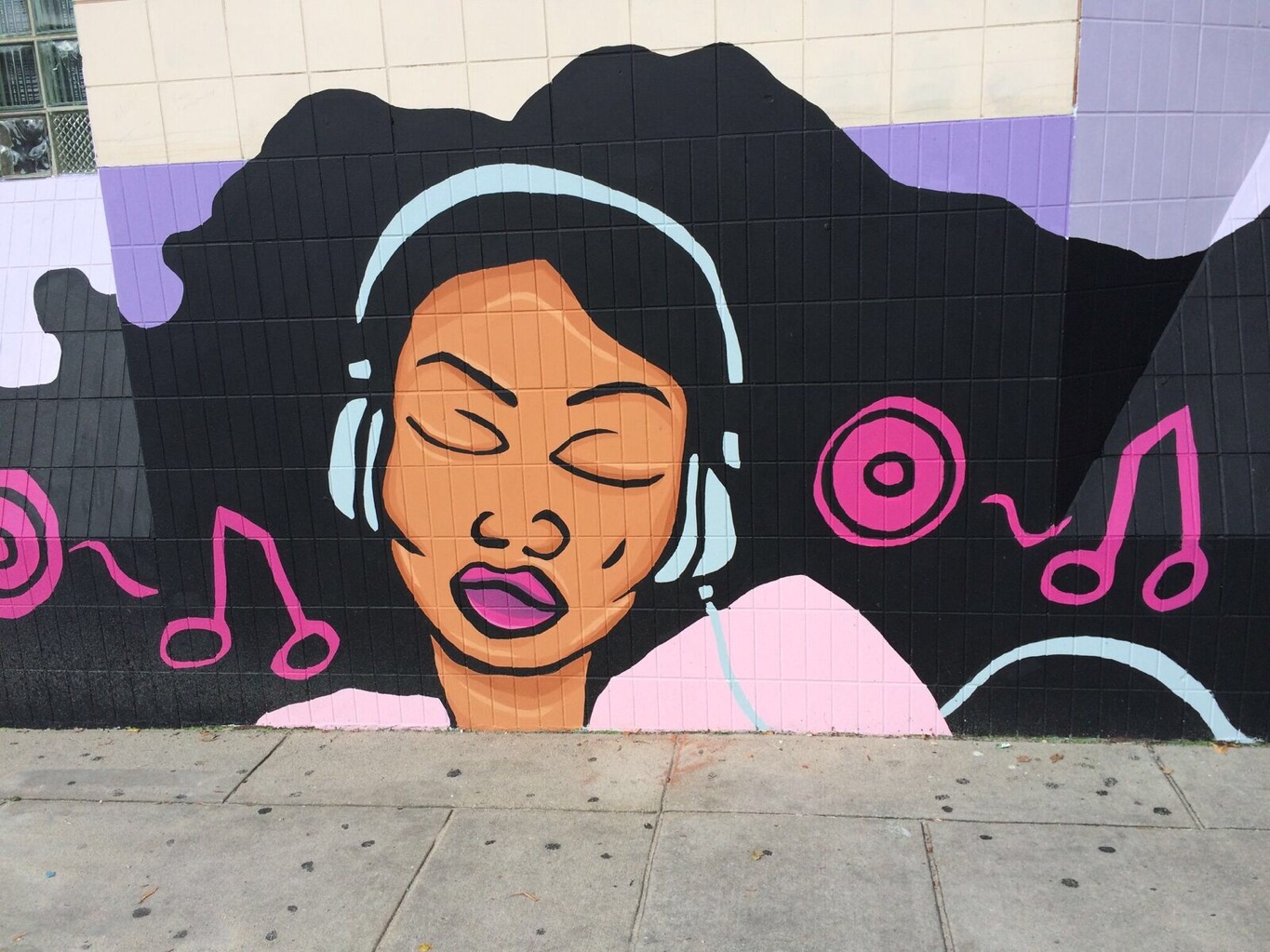 “For my opinion to be heard and what I want on this building, it meant a lot," said Avery Williams who worked with Megan Lewis to create a mural outside Shake and Bake. 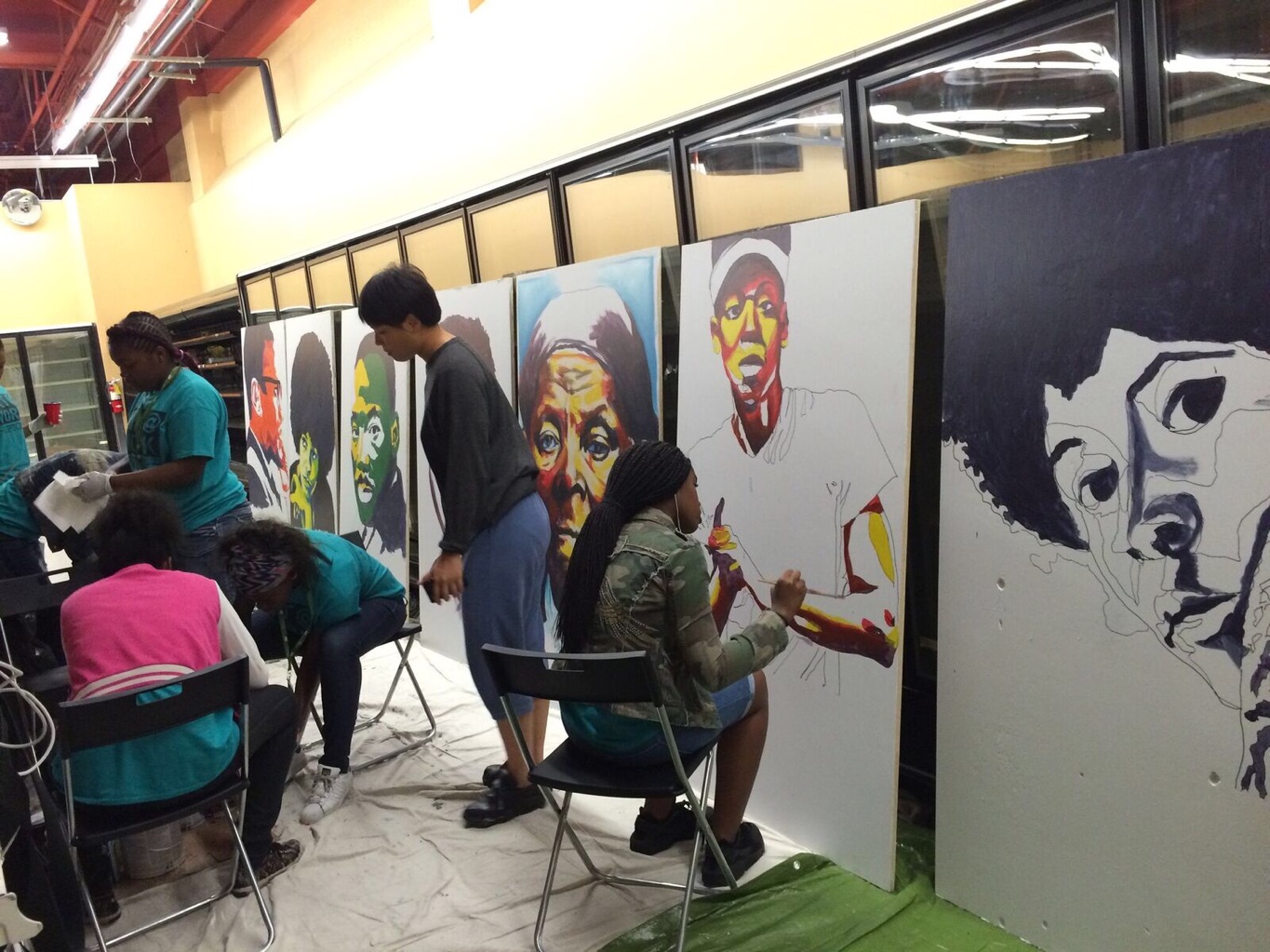 Ernie Shaw’s group insisted that their opinions be heard when they wanted to add the rap artist Lor Scoota to the pantheon of portraits that would be placed above the Crazy Mart variety store. Scoota, whose real name was Tyrese Watson, was gunned down in Northeast Baltimore on June 25. Shaw did not want to glorify someone with the kind of checkered past Scoota had. In the end, however, he found a compromise: half the 12 images would depict historic figures like Harriet Tubman and Muhammad Ali; the other half would show people from around Pennsylvania Avenue – including Scoota.

“For the people who know him, that’s going to be meaningful, right? Folks who aren’t aware of his music? He’s just another person from the neighborhood,” Shaw said. 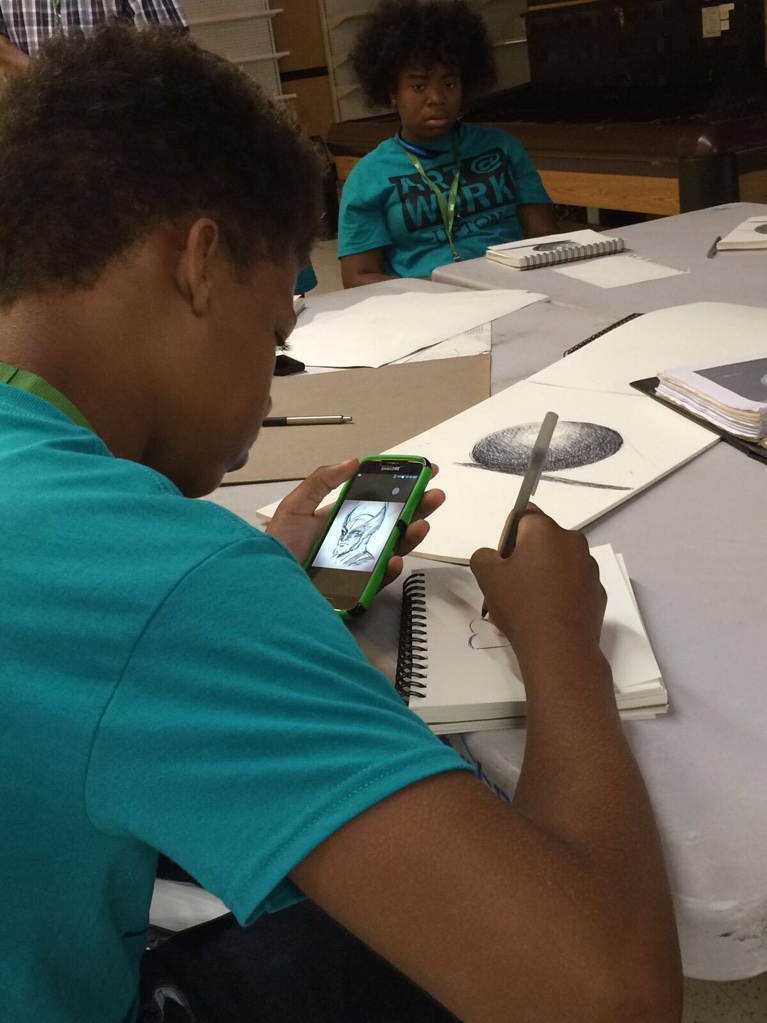 Parents were pleased with what their teens accomplished in such a short time.

“This was a great opportunity for him to get paid to actually do his art work and give back to the community,” said Dorrian Mack, whose son Jordan worked on murals inside the Avenue Market. “I feel they really had a voice in what they decided to do and what portraits they decided to paint. … It actually meant something to them, the work that they were painting.” 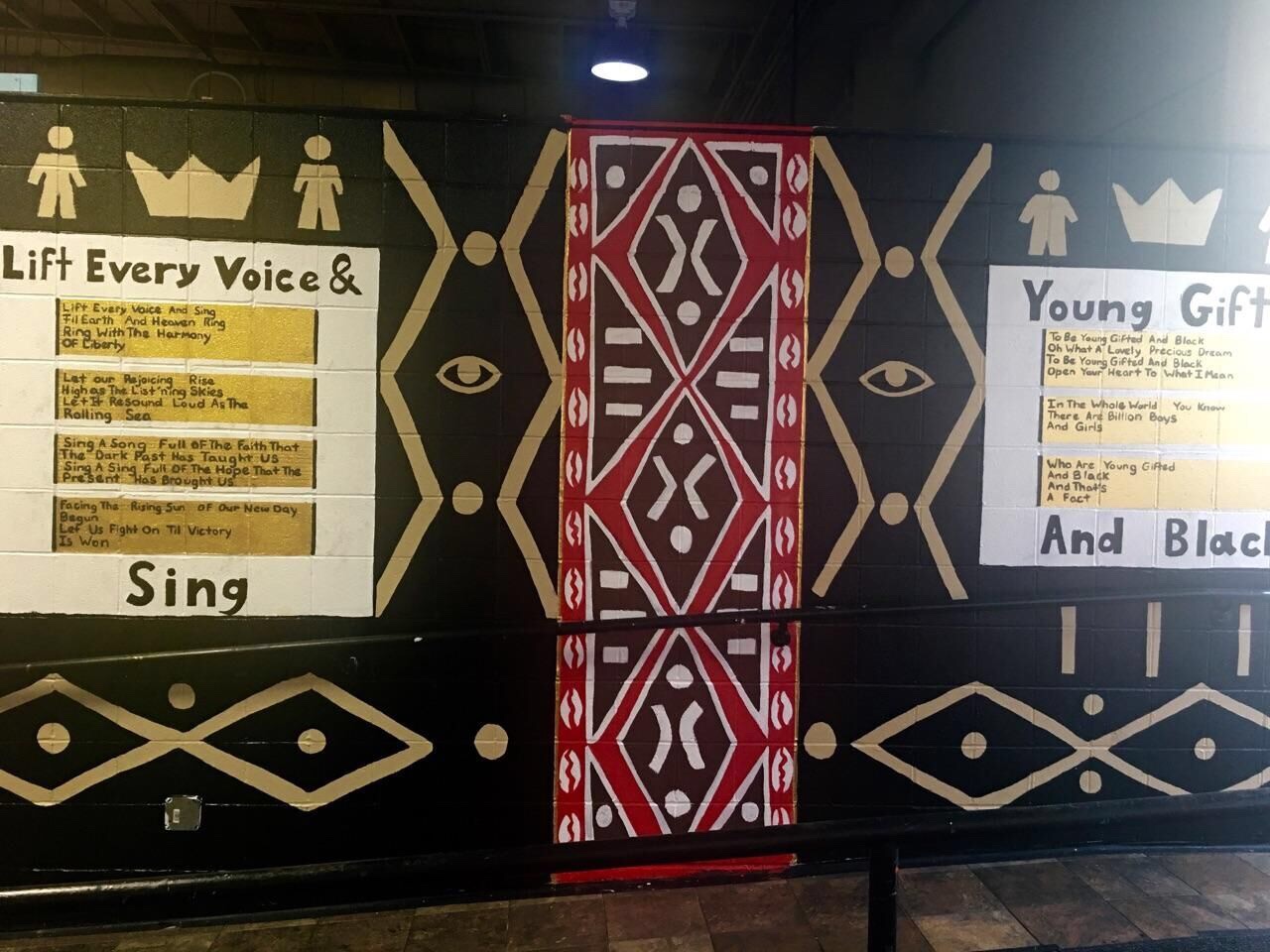 That is what Michael Thomas had in mind when he guided his group into painting murals in the market that paid tribute to the songs “Lift Ev’ry Voice and Sing” and “To Be Young Gifted and Black.”

“People my age didn’t know the words to the song, which blew my mind completely,” said Thomas, who recently turned 50. Not only did his group of teens, including Jordan, gain an appreciation for the songs, but so have passersby who pause to sing the lyrics, which are now printed on two walls in the market. 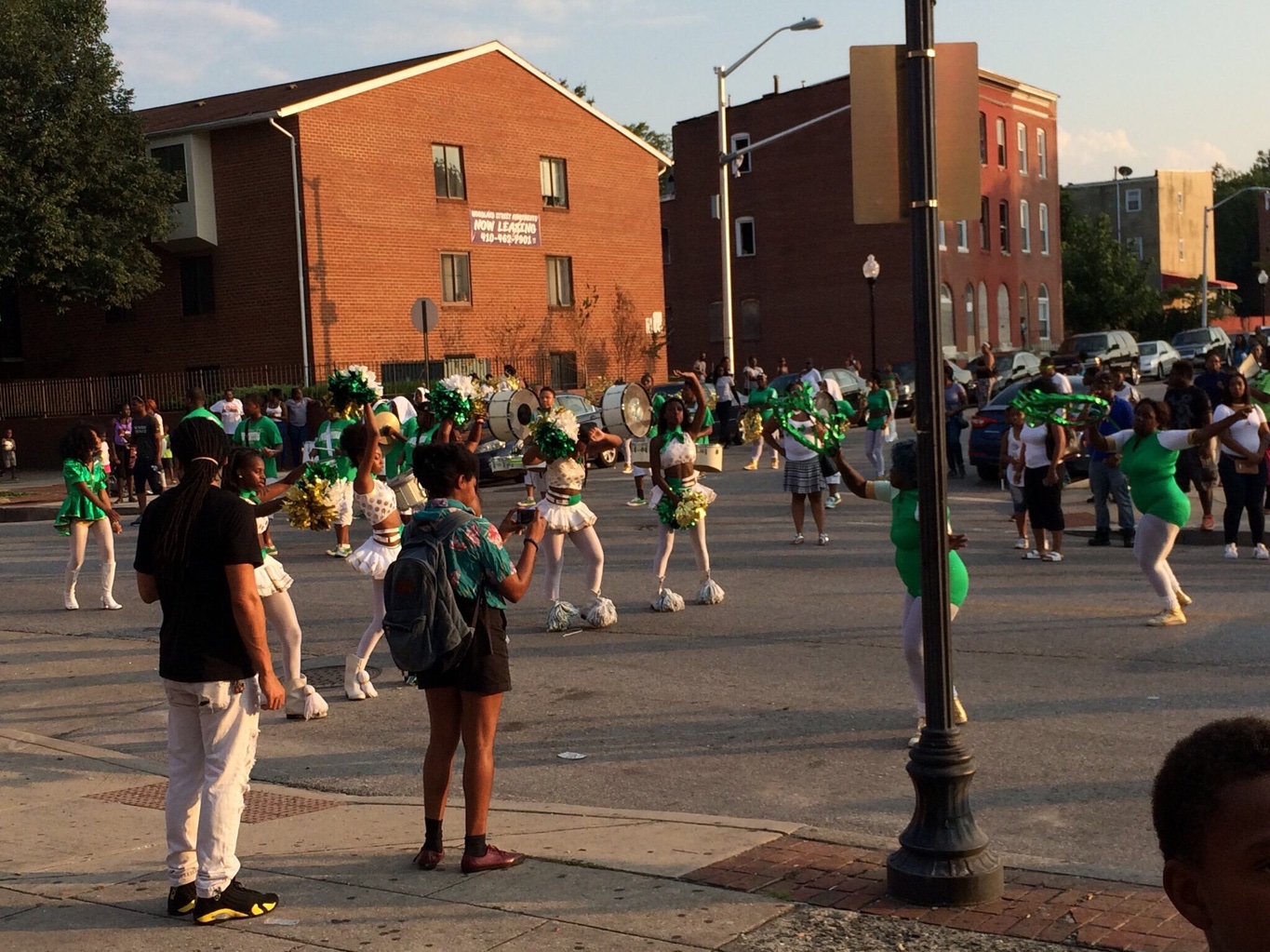 As he looked over the closing celebration on July 29 – with a marching band, free skating and pizza at Shake and Bake and trolley tours of the new artistic additions to the area – Elder C. W. Harris, the founder of Jubilee Arts and other neighborhood institutions, beamed with pride. 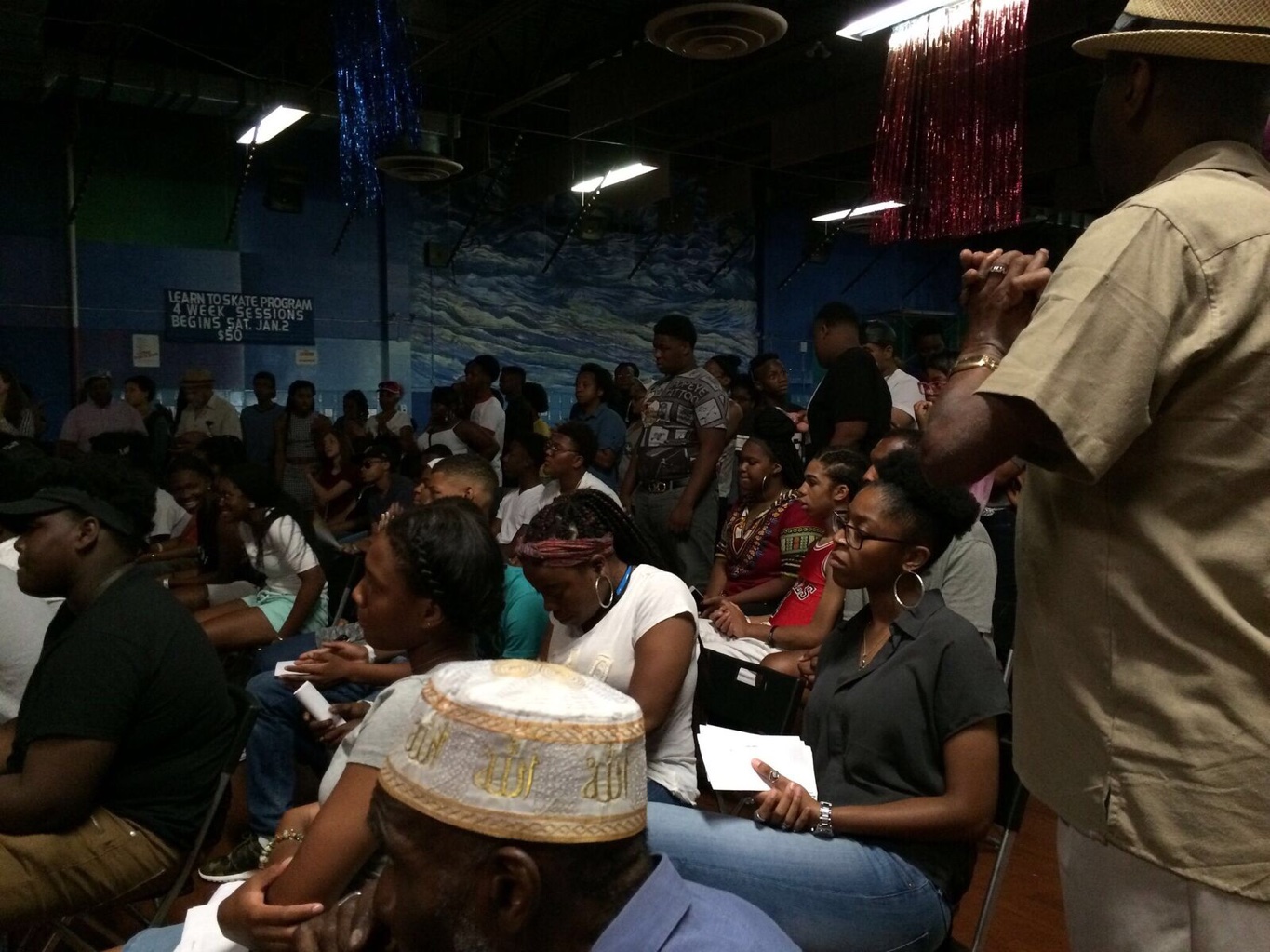 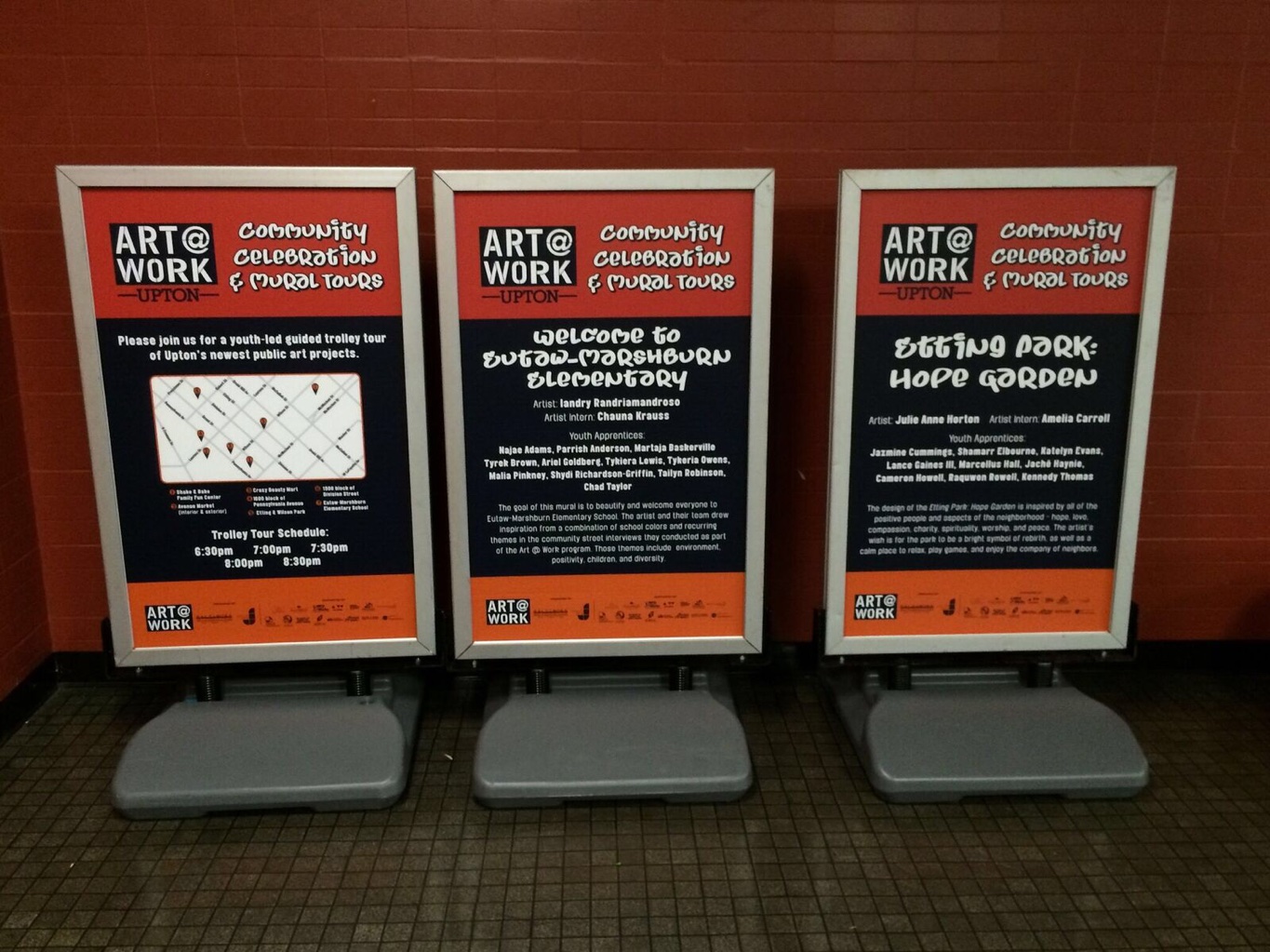 “As a founder, as one who is concerned about the welfare of our community, what we have here reaches far beyond my imagination," Harris said. "I am so proud of us participating in supporting our young people and giving them another path.”