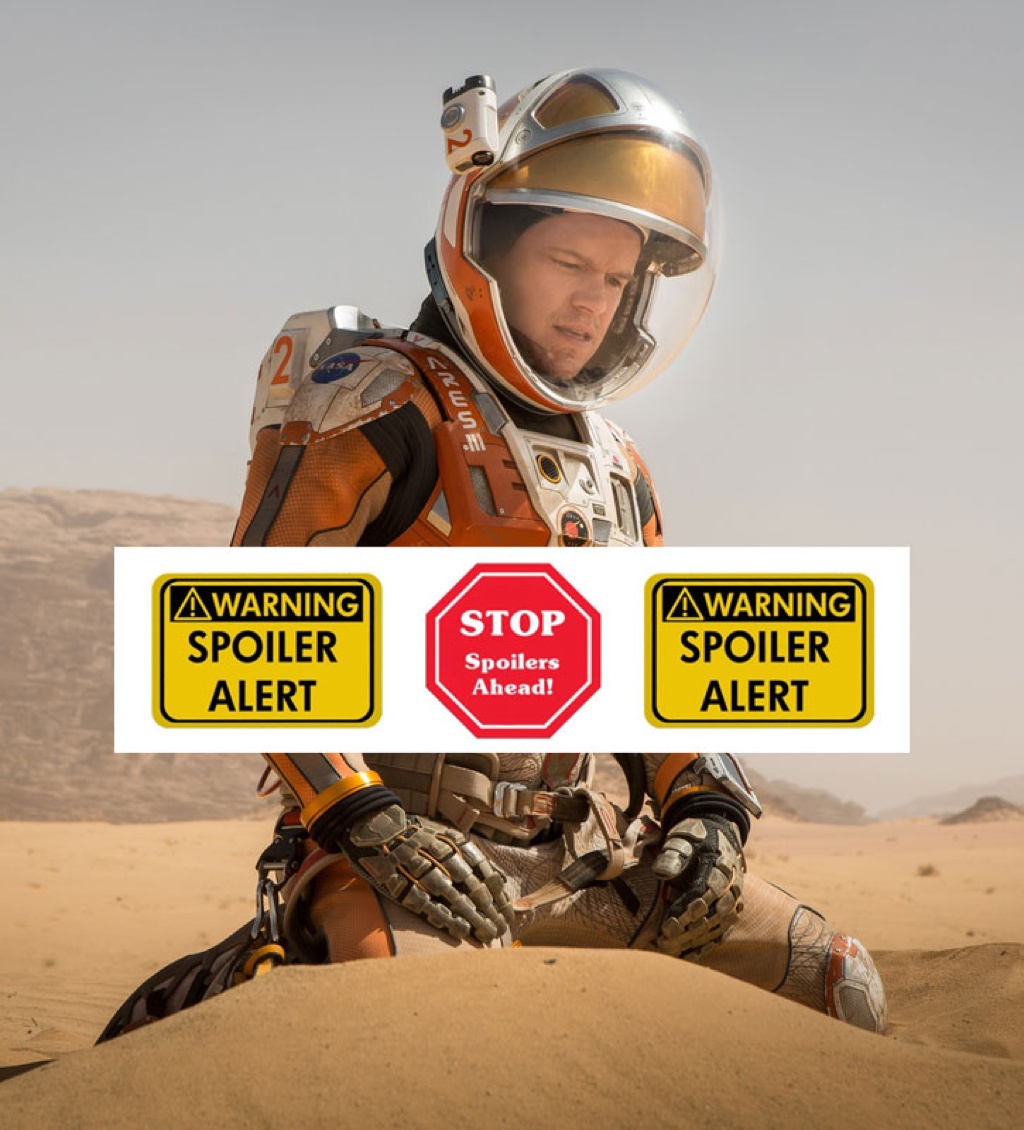 Takes a few minutes to load the entire page but is worth the wait.

This is a fan page.

PROCEED ONLY IF YOU HAVE FINISHED AT LEAST HALF THE NOVEL (Chap 13).

Chapter summaries are given at page bottom, for quick story recap.

Visit Part 1 of this page here :

A Martian dust storm forces an emergency abort of the month long mission on Sol 6 itself ( Sol is a Mars day, 39 mins longer than Earth day).

All 6 astronauts in the Hab on Mars, begin putting on EVA suits (Extra Vehicular Activity), as they monitor the growing dust storm.

During the walk from the Hab to the nearby MAV craft, astronaut Mark Watney is presumed dead in an accident and left behind on Mars. MAV is visible like a lighthouse. 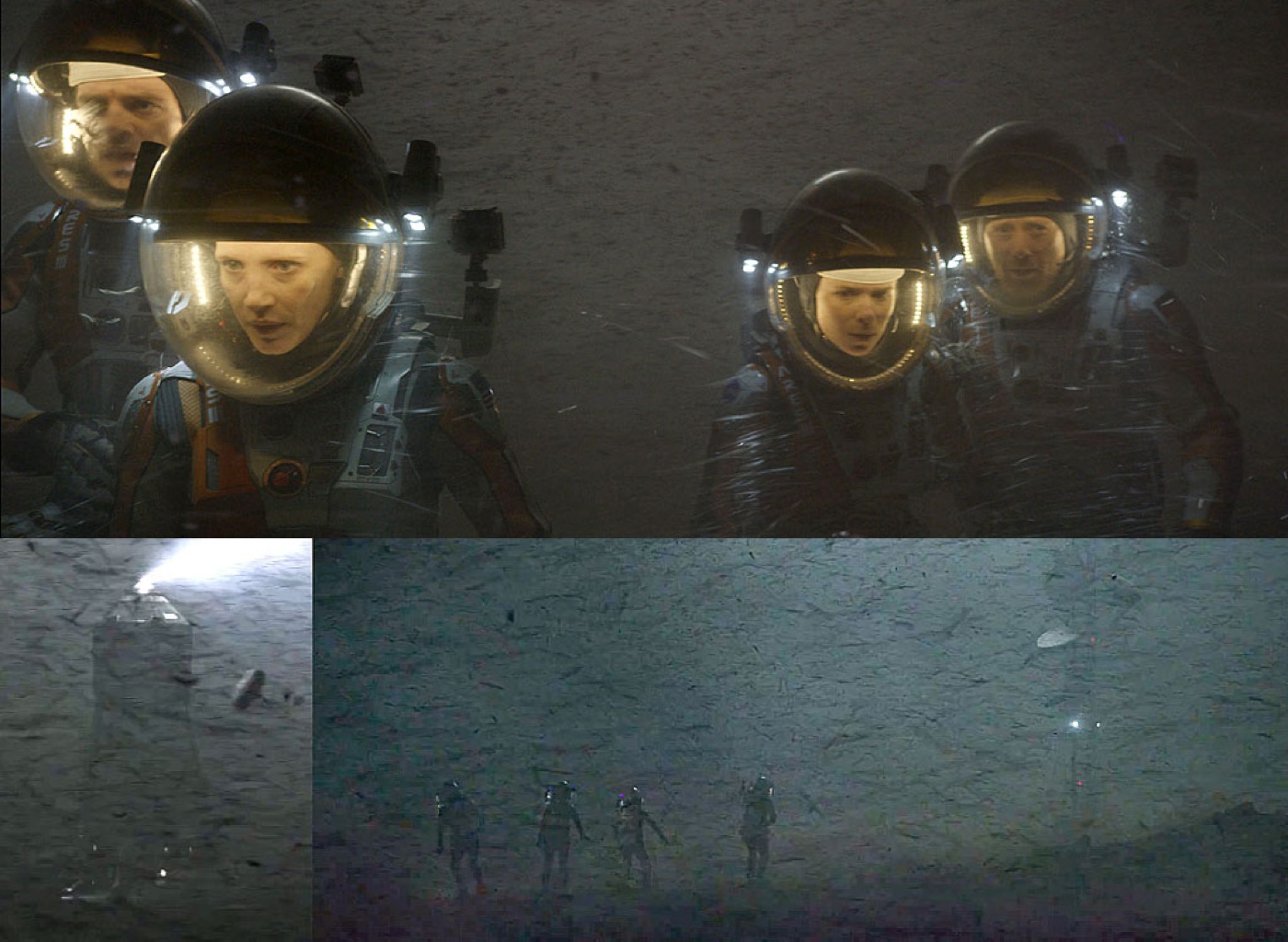 The remaining 5 astronauts lift-off in the MAV for the Hermes spacecraft in Martian orbit and head back for Earth. 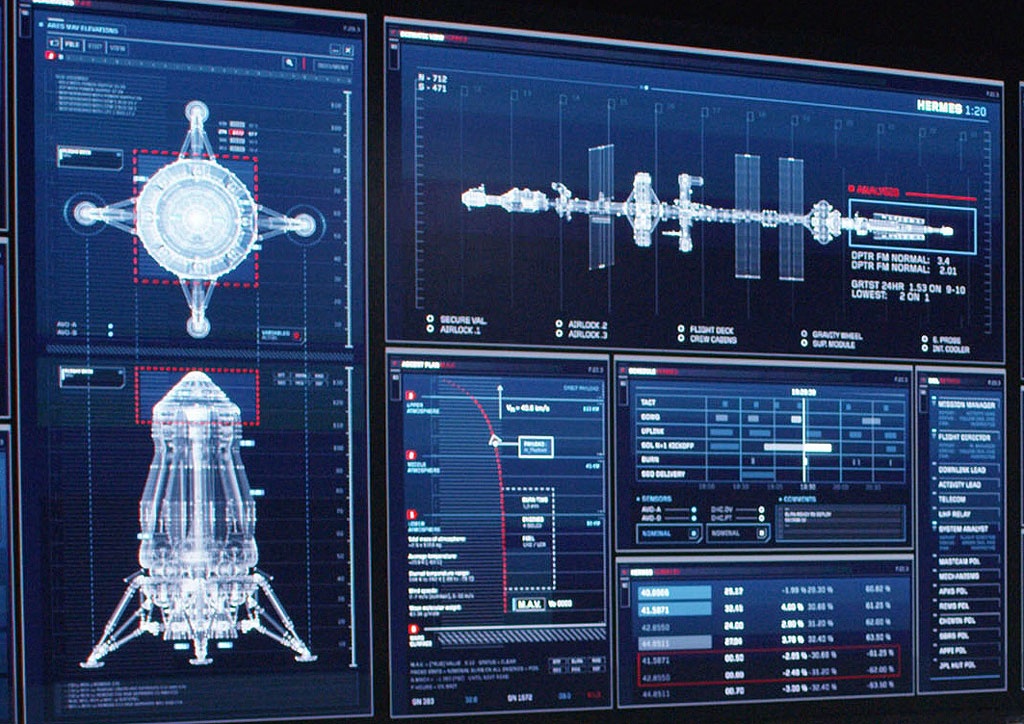 Only the MAV takes off, leaving the landing gear and fuel tanks behind.

Mark Watney, injured but not dead and alone on Mars.

Watney somehow makes it back to the Hab airlock 1. 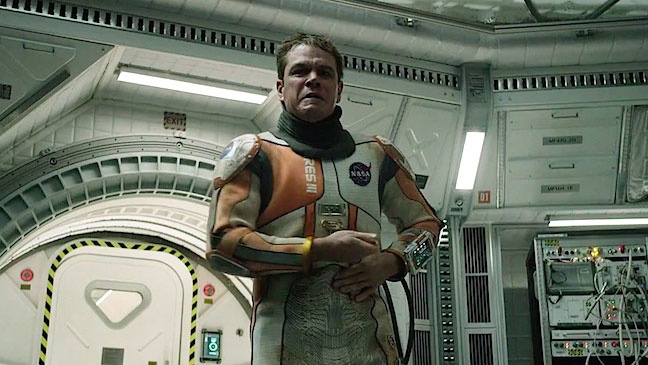 The piece of antenna that pierced Mark Watney's suit and body. The arm computer can be seen here, which controls suit pressure etc.

Making log entries on the computer, after basic self-medication and treatment. Bunk Beds seen behind. A map of Mars on table.

The main area of the Hab.

Preparing the Hab for potato farming.

Vacuum sealed potatoes, intended for the thanksgiving meal preparation on the Hab.

Burning Hydrazine to create water. Zoom in to see the tiny flame and apparatus.

Things go wrong for Mark Watney while trying to burn off excess Hydrogen.

Watching TV programs of the 70s on the computer. The plastic screen of the flourishing potato farm can be seen on far left, through the circular passage.

What a real-life RTG looks like (not from movie). 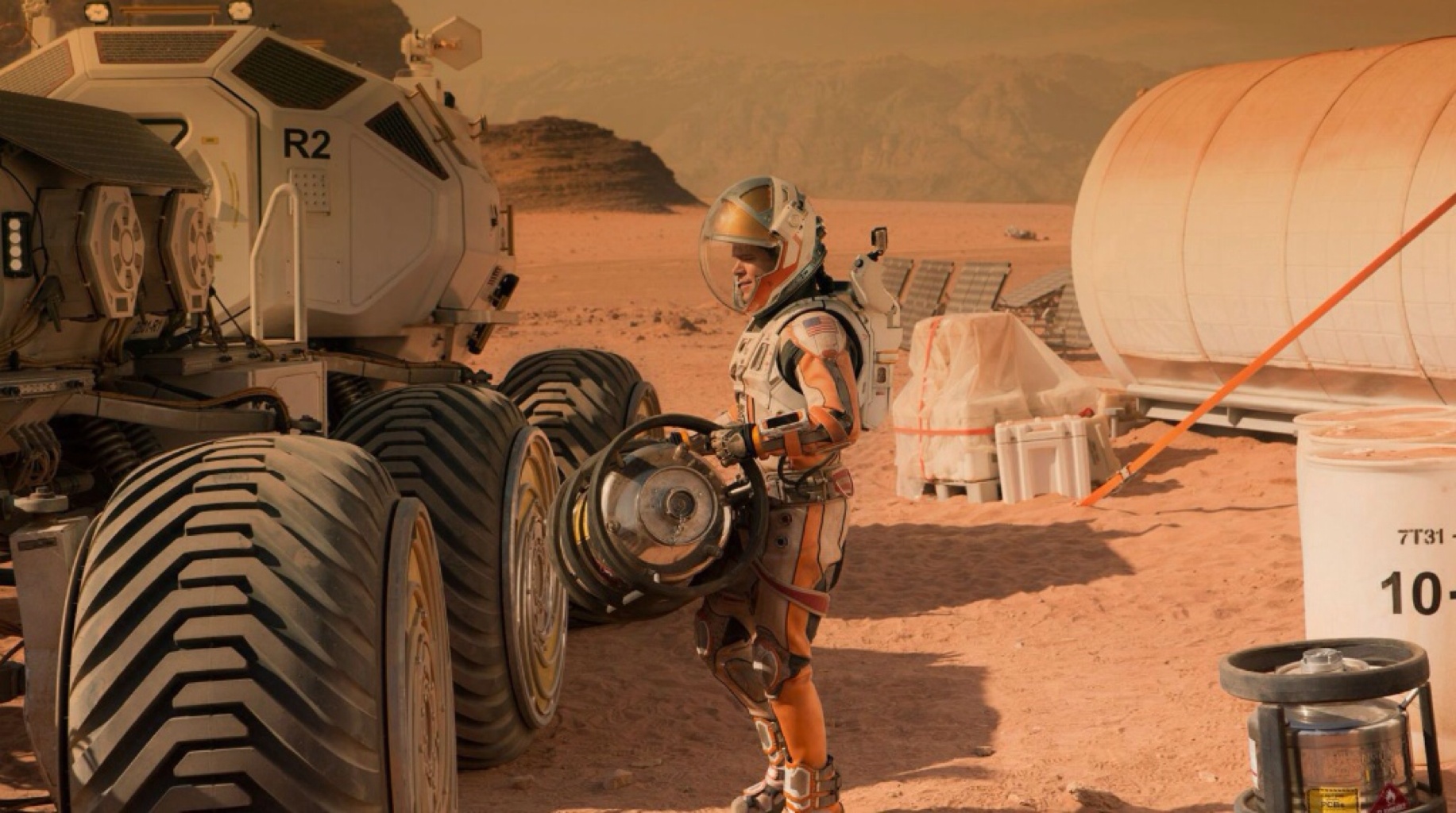 The up and down trip to recover Pathfinder's communication equipment, dead since 1997 took a total of 21 sols and 800 kms. 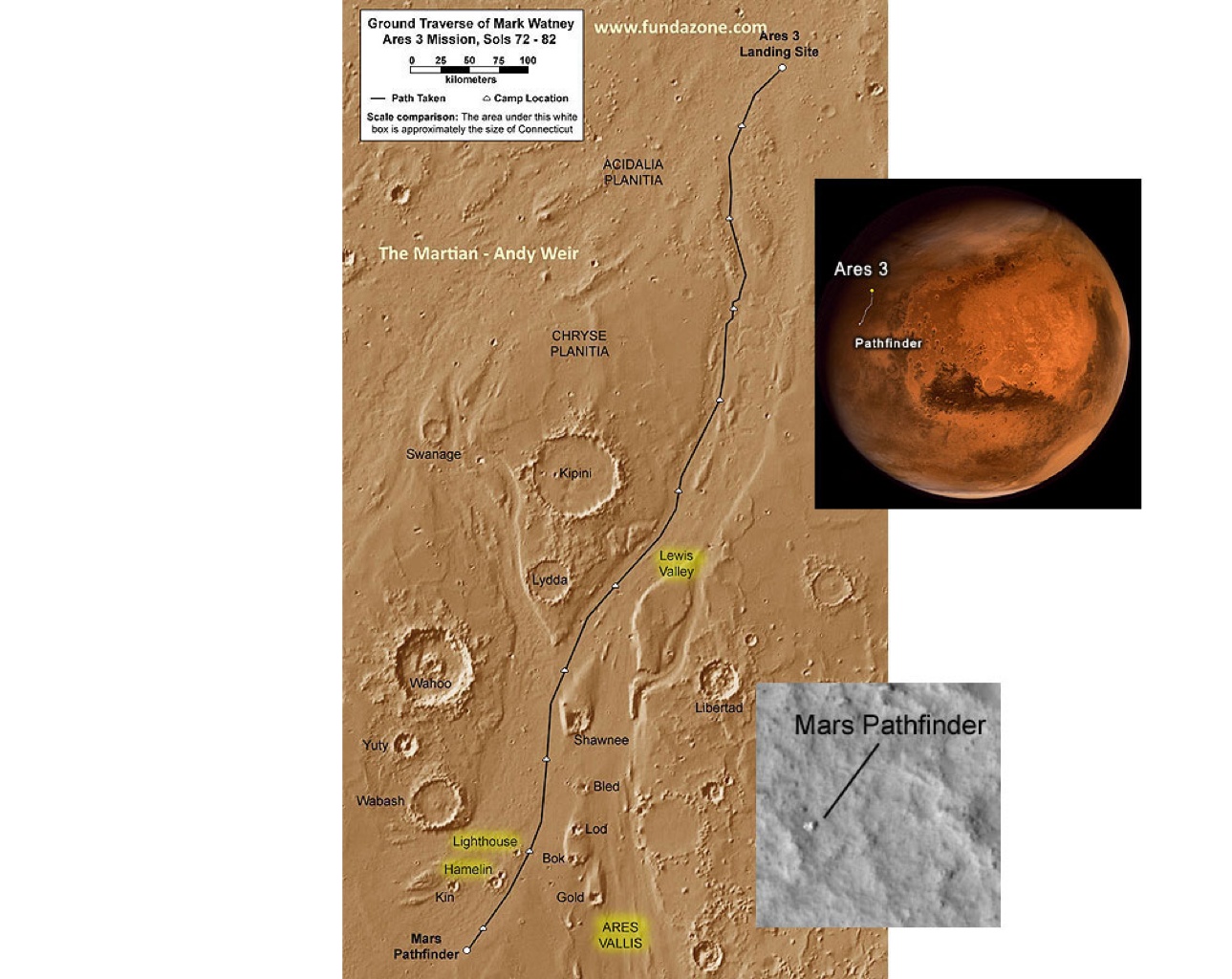 Pathfinder Lander and and the toy-sized Sojourner Rover (not from movie).

The closed lander is seen mounted on top of main Rover 2. Rover 1 is used as a trailer, seen behind. Rover 2's front design seen in an interview pic. 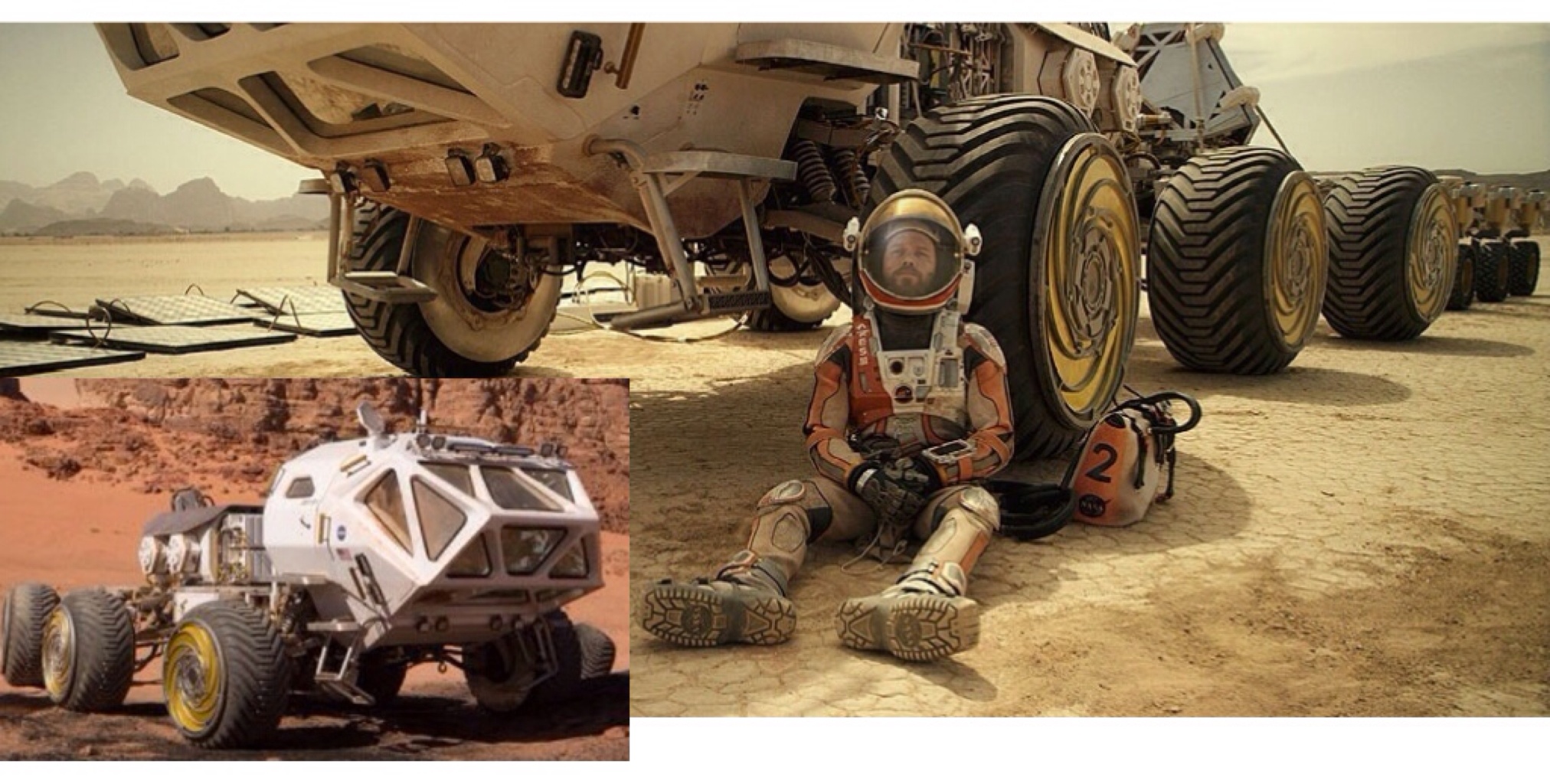 After some repairs and cleaning of the Pathfinder Lander, Mark Watney manages to communicate to Earth at last. 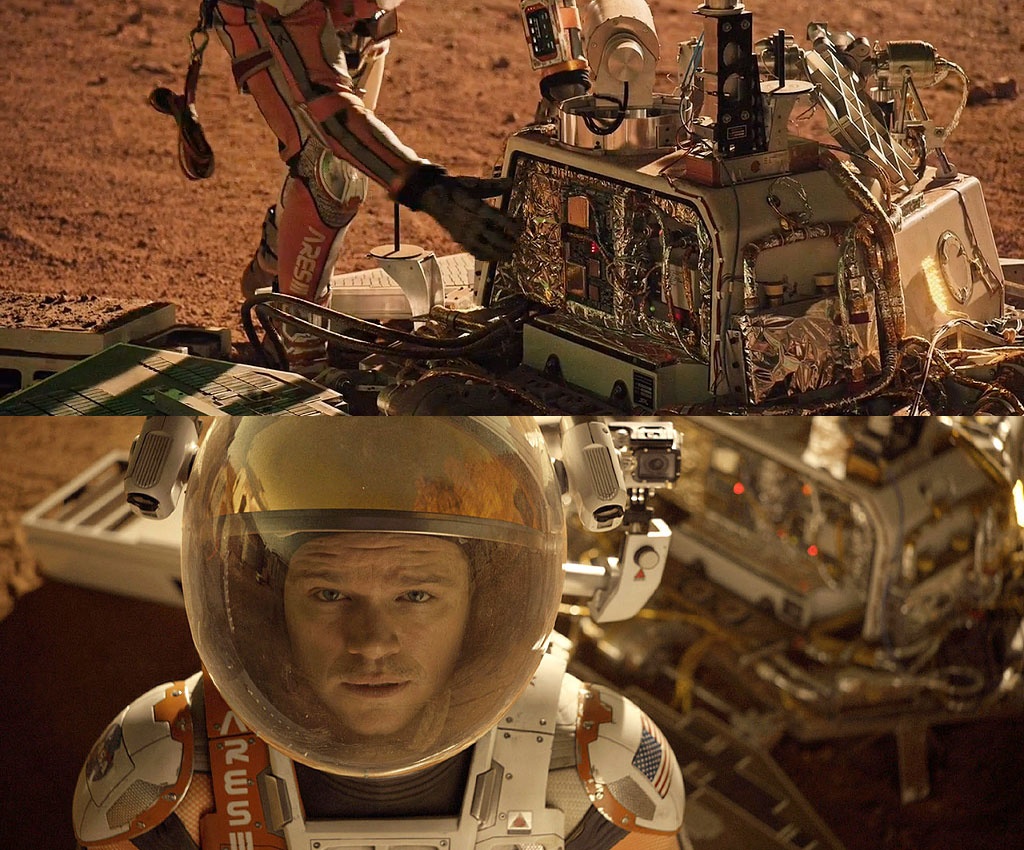 After 4 months on Mars, the Hab is breached, throwing Airlock 1 away explosively, with Mark Watney inside. The Pathfinder lander can be seen next to solar panels.

Airlock 2 and 3 (unseen) are still intact.

Airlock 1 lands upside down, at a distance from the Hab.

Watney's helmet cracked on impact inside the airlock. Duct taping it helped the suit retain pressure but reduced visibility.

Watney is horrified at seeing his potato farm destroyed and dead forever. He is in the taped up helmet still. 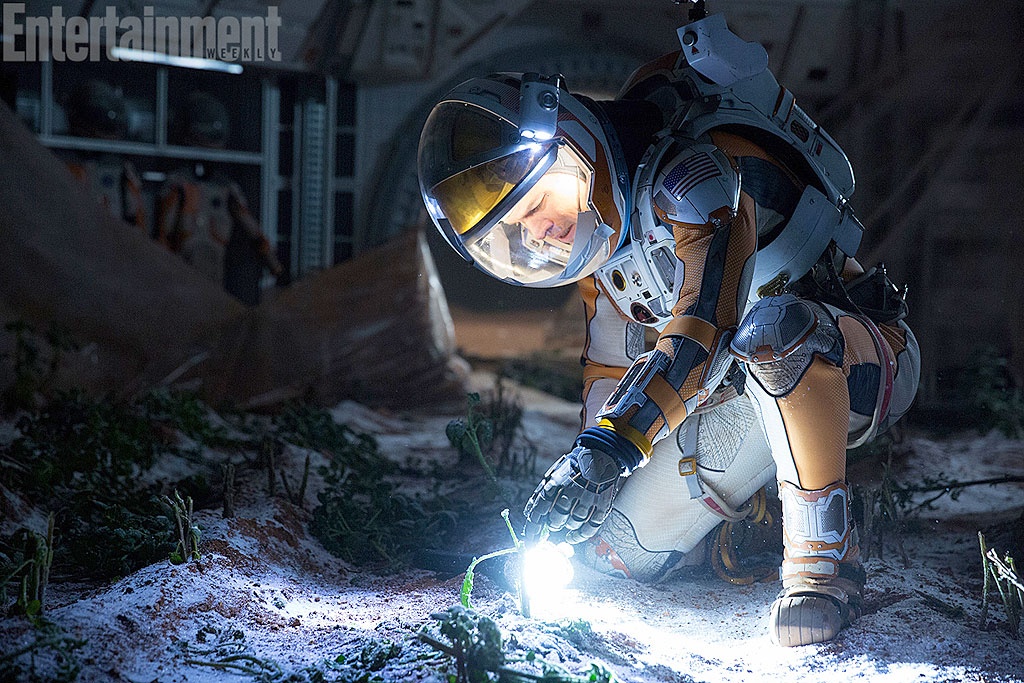 Melissa discussing a risky and unplanned and rescue mission with the Hermes crew. 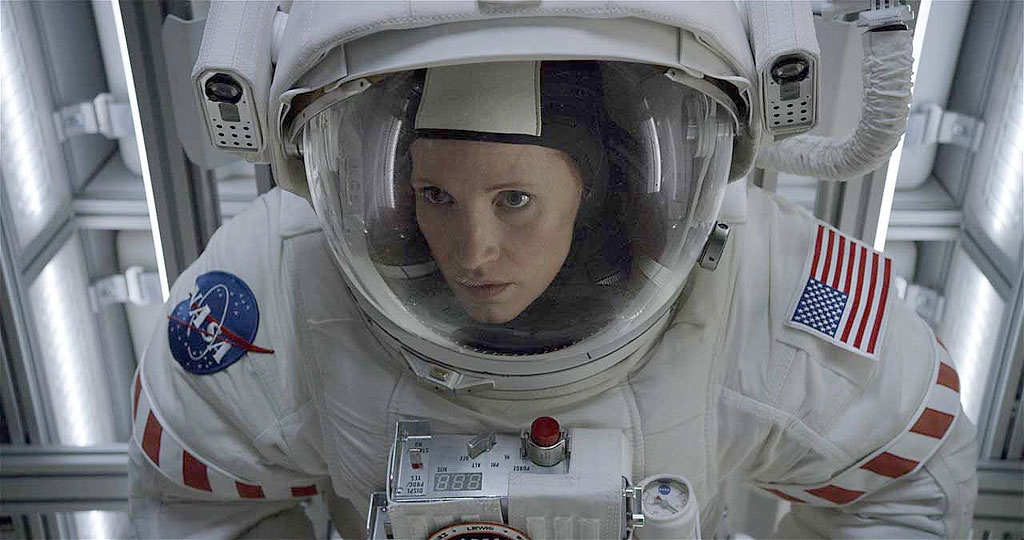 Hermes spacecraft, with Astronaut Beth Johanssen seen in the window. The spinning cabins produce a low gravity due to centrifugal forces. Rest of the craft has zero gravity. 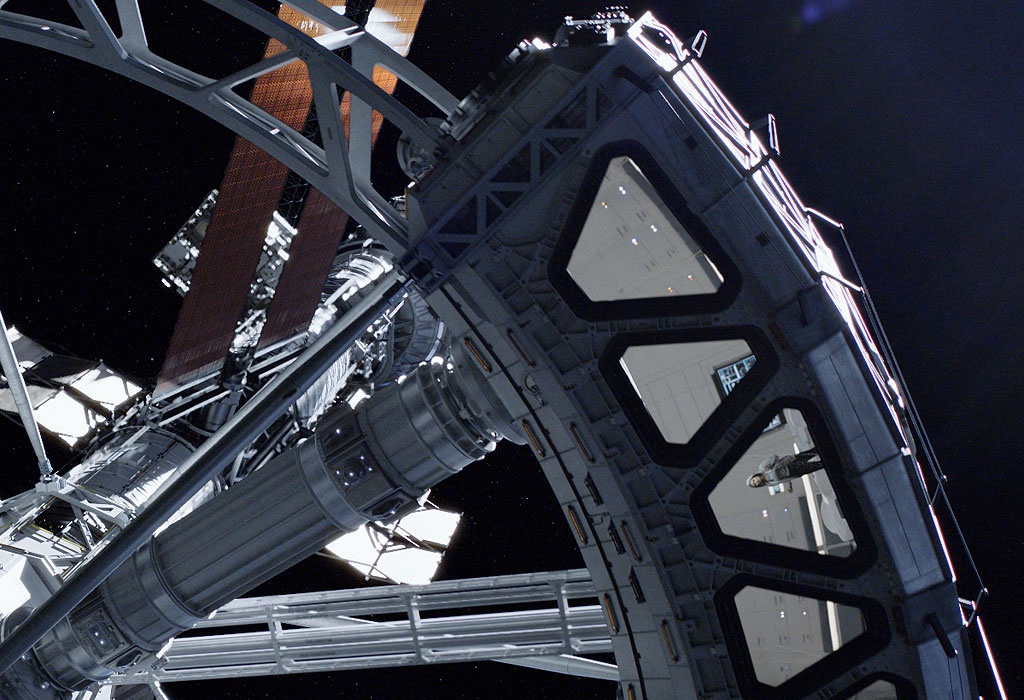 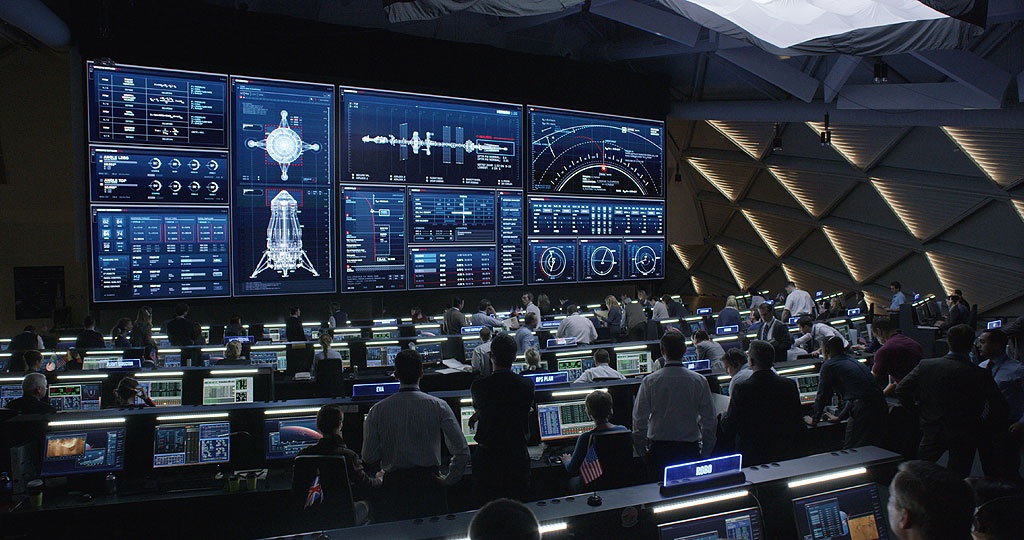 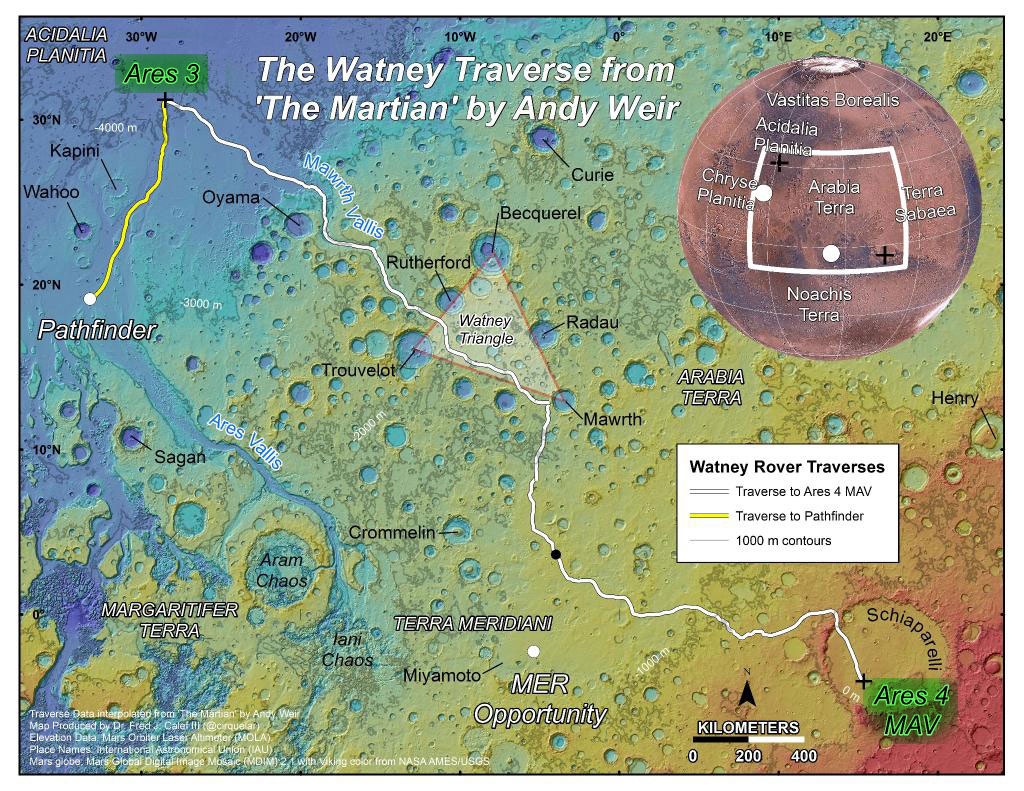 He reaches Ares 4 site after spending a year and half on Mars. 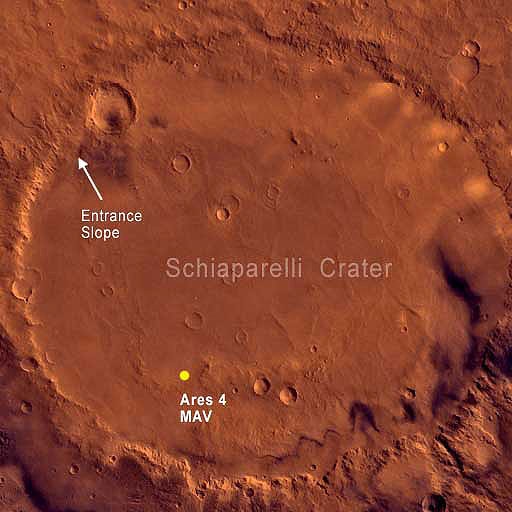 The MAV at Ares 4 site, with its top nose section discarded, to reduce take-off weight and revealing the starry night sky. Even the unwanted extra 5 astronaut seats have been removed.

Windows seem to be open to Martian atmosphere, covered with just some Hab canvas. This is the scene when he is about to lift off from the brutally stripped down MAV at Ares 4 site. 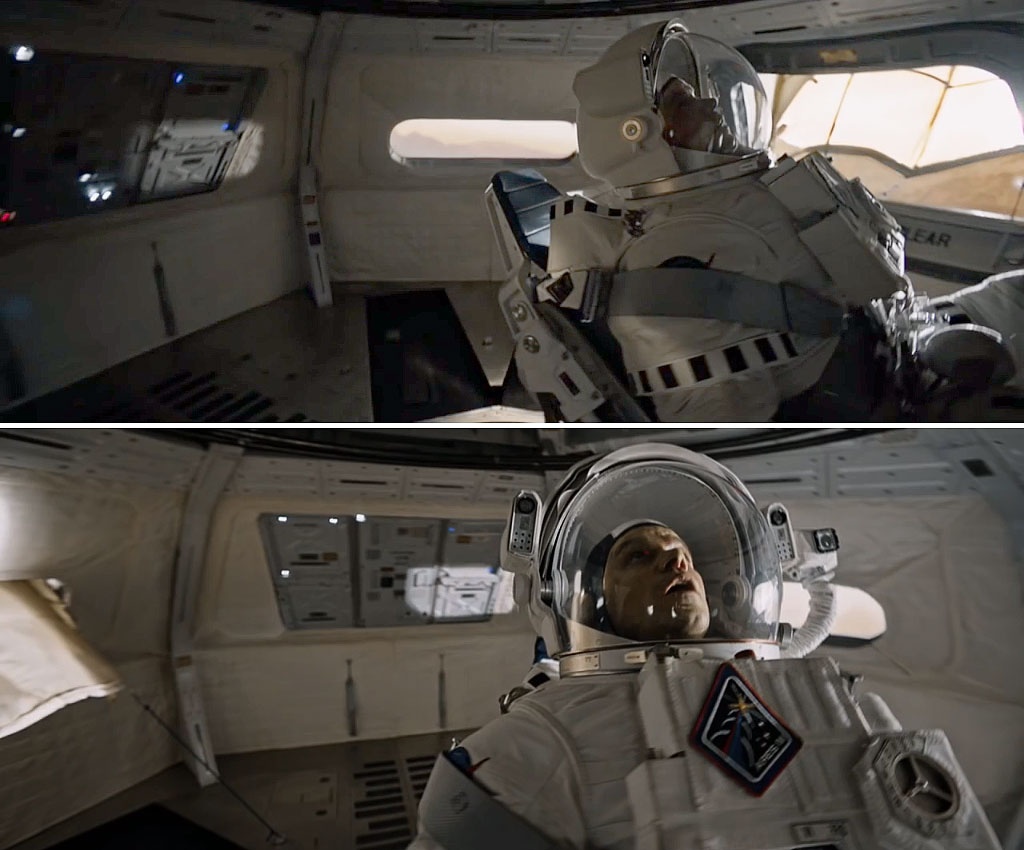 Had the supply mission failed, the entire Hermes crew except the youngest and smallest astronaut, Beth Johanssen, would have committed suicide right away to save on food. Beth was chosen to live, as she had the best chance of survival. Eventually the remaining food stock would get over before she reaches Earth again, and would have to eat the other astronauts. Yes, the crew had considered a canibalistic survival option !

NASA and Hermes are acutely aware that the approaching dust storm can mean life or death for Mark Watney and they can only hope for a positive outcome.

On Sol 549, for the 1st time, NASA allows Hermes to talk directly to Watney. Till then all communication was routed and filtered thru NASA. On Earth, NASA and the media anxiously watch the countdown, reduced to mere spectators for the upcoming space drama. Watney sits strapped to the MAV chair, awaiting a remote launch and wonders how he survived a year and half on Mars alone.

The problems in rescuing Watney never end and suffice to say this chapter makes for a nail-biting action packed grand finale ! Worth reading this chapter twice !

Hope you enjoyed the book, this fan page and the movie.